It is interesting to learn that ‘Turismo’ (tourism) is relatively new to the Nicoya Peninsula and Nosara.
Upon surveying the areas fertile, rain-forested mountains and dense green jungle, it is hard to imagine that some 50 years ago the entire region was made up of a handful of large cattle ranches. All vegetation was deforested to promote cattle grazing and agriculture, resulting in a stark, dry, and dusty landscape. Cowboy culture ruled the land that is now referred to as one of the worlds rare “Blue Zones”.

Prior to Nosara’s cattle period and Spanish occupation the indigenous Chorotega tribes peacefully coexisted throughout Central America in sedentary farming communities. With the only value thought to be for cattle raising, little changed over the decades.

In the 60’s and early 70’s perhaps the intrepid surfer or birdwatcher might have stumbled across the area, but with no infrastructure or services available, they undoubtedly moved on to locales offering more amenities. Around this time (1969-1971) an American land developer became enamored with Nosara and set forth an ambitious blueprint outlining the creation of a Shangri-La community of private full-service home sites including roads, a hotel, tennis courts, and even a golf course. A huge swath of coastal real estate that became known as ‘The American Project’ was purchased and subdivided into sections that still remain today.

Ocean view lots were offered for $3000, and full-page advertisements appeared in the New York Times and Washington Post promoting the fabulous new paradise of Nosara. Ultimately his dreams fell short. When the developer could not fulfill his promises, his interests were liquidated and the property owners united to form the Nosara Civic Association (NCA), with the purpose of protecting the environment and providing its residents with basic services. Over the last 40 years the NCA has done a remarkable job keeping Nosara green and protecting wildlife.

With border restrictions easing, now is the time to plan a trip. Olas Verdes is firmly committed to sustainable tourism, and in between surfing, yoga classes, and lounging by the pool, we can help you find some hidden nature gems and even plant a tree. 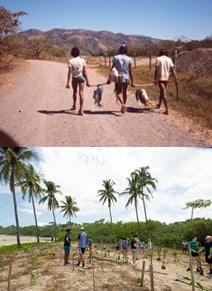